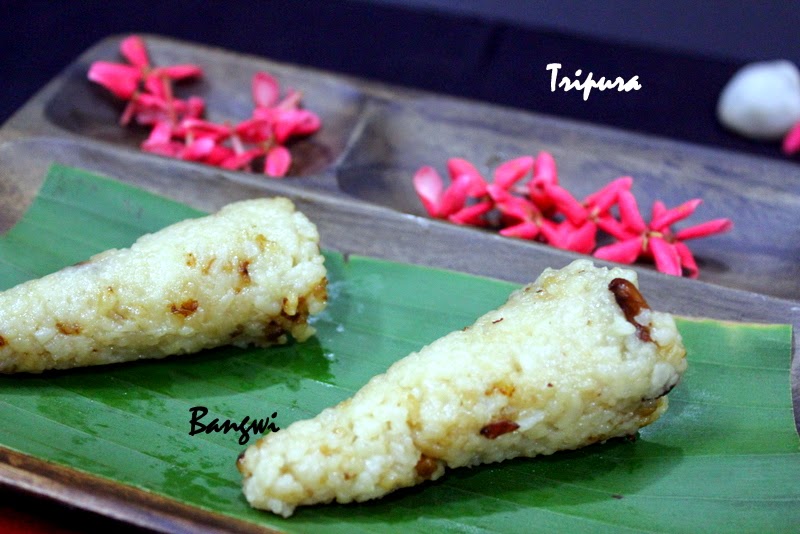 Today we shall cook from Tripura. This is located on the eastern side and is famous as "Queen of Eastern hills". It is nestled in the lush green hills, has beautiful valleys and transparent waterscapes which causes a magnetic spell on the tourists and visitors.

The Tripuri's are essentially non vegetarians and hence the main courses are mainly prepared using meat, but with the addition of vegetables. Traditional Tripuri cuisine is known as Mui Borok. Tripuri food has a key ingredient called Berma, which is dried and fermented fish. The food is considered to be healthy as it is prepared without oil. They say flavor wise, Berma is more on the sour side.

While on my search for vegetarian recipe from Tripura I found that....

Tripuri people are very fond of having cakes. No occasion is complete with out cakes, whether it is religious, ceremonial or gathering. But these cakes are not the cakes that we eat , these are rice cakes.The main ingredient of Tripuri cake is special rice called Guria. There are different variety of Guria rice, the jhum variety is most sought after, and has the sweet fragrance and most tasty. Other than guria, a rice variety Mimi is also used in preparing the cakes. Some cakes are prepared purely with Guria rice; some are mixed with other variety of rice. Some cakes are made up of whole some rice; some are prepared from the rice flour. Some are prepared with sugar, some are with out sugar. That is why it is even healthy and not restricted to diabetic patients and to hypertensive heart disease patients; no oil is used in most of the preparations.I tried to search on these varieties of rice, but had no luck. I tried to get some sticky rice here, with no luck, finally I used Japanese rice which is sticky rice.

I followed the recipe , but could not follow it completely.I tried cooking the rice in the banana leaves,they were on steam for nearly 1 1/2 hours, and the rice needed to cook at least 70% more. So I removed these from the steamer and cooked in a pressure cooker. The taste of the rice was pretty good, just like the rice we make with some nuts.

I was keen on cooking Alu Mosdeng, which is supposed to be served with these rice cakes, but even after frantic searches I could not get the recipe ,although I have no clue what this Alu Mosdeng would have been ,perhaps some kind of potatoes.

Finally I have cooked just the Bangwi, a rice cake, minus the pork. 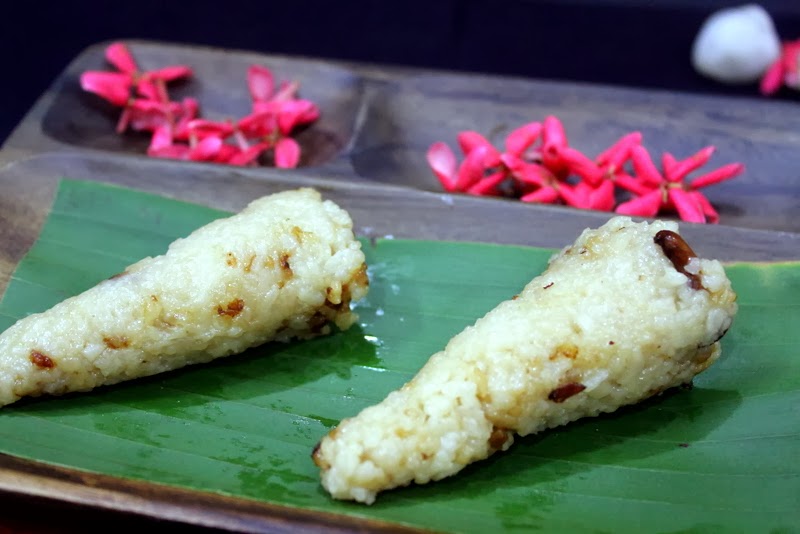 Bangwi:
It is special type of cake made only by Tripuri. The special type of leaf used for preparing this cake is Lairu, but I used a banana leaf , which according to the recipe can be used.

This is how I made the Bangwi...
1 cup Japanese rice or any sticky rice ( the original recipe asks for Mami rice)
Handful cashew nuts
Handful raisins
2 tsp ghee
1/4 tsp salt
Soak the rice for 4-5 hours
Soak the raisins for an hour.
Sauté the cashews in ghee.
Drain the rice and place them in a strainer.
Add ghee, salt, cashews and raisins.
Cut the banana leaves into square pieces, and make cones from these.
Fill in the prepared rice and tie the top with a banana leaf strand or some kind of thread.
Place it to steam.
The original recipe demanded to steam for an hour, but since I used different variety of rice, it did not cook even after 1 1/2 hours.
I finally cooked in a pressure cooker.
The rice was slightly over cooked, but it tasted alright. 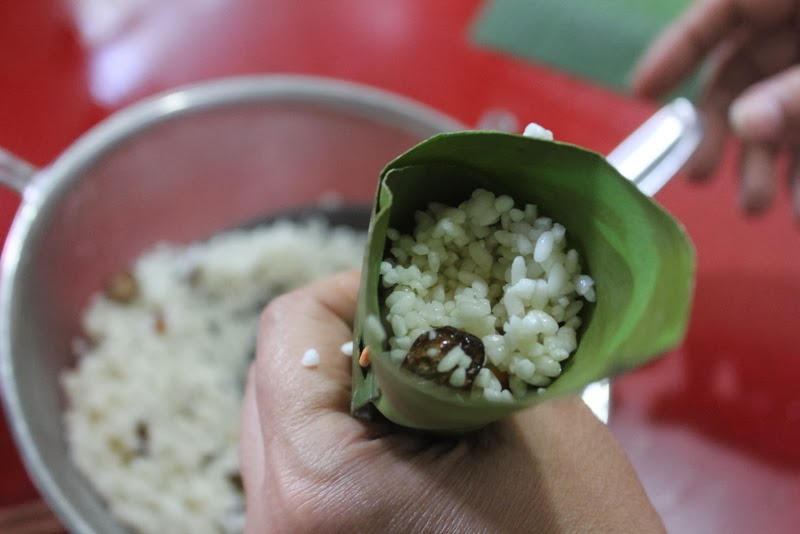 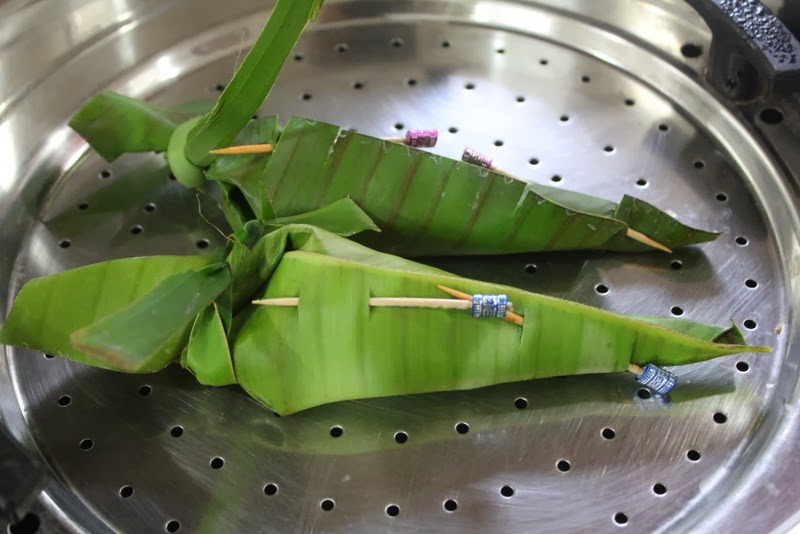 Notes
If using Japanese rice one can cook these with a ratio of 1:1 , 1 cup rice, 1 cup water.
The rice can be moulded later , since we get the basic flavor from its ingredients.
Another way to make these could be by preparing the cones in the similar manner and then cooking them in a pressure cooker., this will lend the flavor of the leaf to the rice.

The recipe seemed very. Simple, but without the right kind of rice it was hard to get what I was trying for, though I really have no idea as to how the original Bangwi would taste or look.

It's a humble request to my readers that if anyone knows the details of Bangwi! please update me and correct me if I am wrong. This is an effort to try a dish which I had never heard or seen. 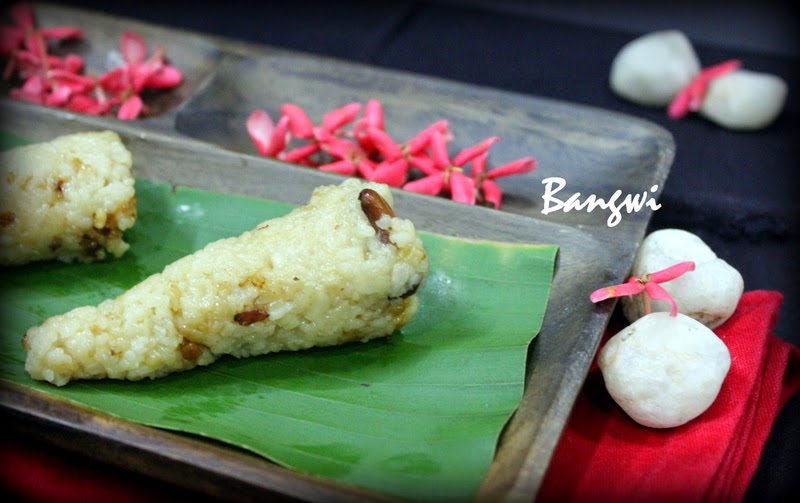