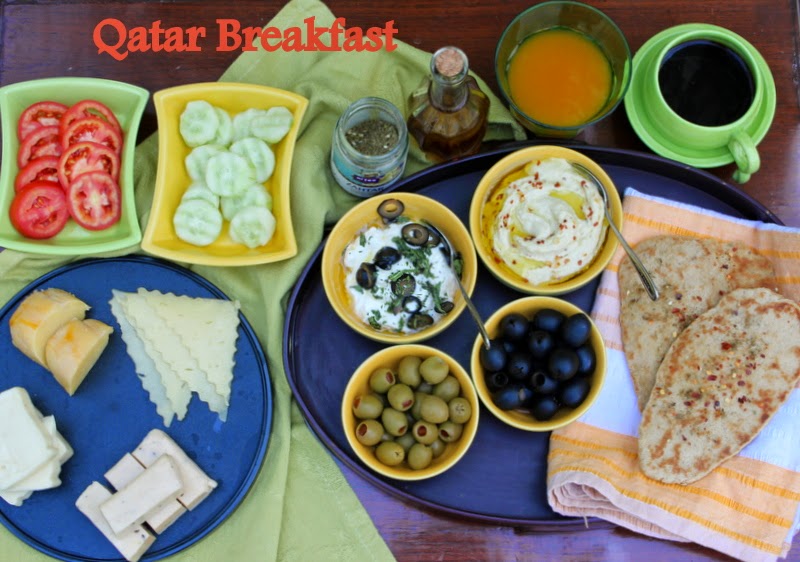 We are traveling Around the World in 30 Days and when it came to a country with Q, it had to be Qatar...as this is the only country with this alphabet.

Qatar's traditional cuisine has been strongly influenced by migrants from Iran and India, and more recently North Africa. The number of foreigners working in the country has led to modern Qatari eating habits being influenced by food from around the world. Many of the country's traditional dishes are based around seafood especially lobster, crab, tuna, red snapper and shrimp and the many different kinds of dates native to the region. All meat is halal, which is prepared in accordance with Muslim laws.

Many locally grown foods, such as dates, sour apples and fresh almonds are considered delicacies. One of Qatar's most important traditional dishes is machbous which is a stew of richly spiced rice with either seafood, meat or both. Traditionally, it is served in a large communal platter.

Coming to Qatari meals,
Breakfast is usually a light meal, which is eaten early and includes yogurt, cheese and olives eaten with coffee.
A main midday meal is usually heavy, beginning with an appetizer, or mezze, served with flat Arabic bread followed by a stew of lamb or fish with cooked vegetables and salad.
Many people do not use cutlery and scoop their food using bread. The evening meal is typically a light snack, except during Ramadan and on special occasions.

I have served a traditional breakfast from Qatar , I made the Pita from whole wheat flour, served it with za'atar and drizzled olive oil. Za'atar is a Middle Eastern spice mixture used in many meats and even vegetables. This is a store bought spice mix that I used.

A platter of different varieties of cheese is a must at the breakfast table, so I served a variety of cheese which we get here.

Labneh is one of their favorite cheese, you may call it Greek cheese or hung curd, it is all the same. Labneh is healthy and light and you can make it using regular yogurt or fat free yogurt but the best labneh is the one you make out of homemade yogurt. It can be easily preserved and a regular labneh lasts 2-3 weeks in the fridge.

The middle eastern breakfast would be incomplete without the Hummus, well we all know that this is a wonderful dip made with chick peas.

A variety of olives ,juicy cucumbers and fresh red tomatoes are served with this early meal and the finale to it is the black coffee.

Pita Bread
3/4 cup whole wheat flour
1/2 tsp dry yeast or 1 tsp crumbled fresh yeast
1/2 tsp sugar
2 tsp olive oil
Salt to taste
Combine the dry yeast with 2 tbsp of water in a bowl, cover and keep aside for 5 minutes or till the dry yeast completely dissolves in the water.
Combine all the ingredients along with the yeast mixture in a deep bowl and knead into a soft dough using enough water.
Cover the dough with a wet muslin cloth and allow it to prove for 30 minutes or till the dough doubles in volume.
Press the dough lightly to remove the air.
Divide the dough into 3 equal portions, roll out each portion into an oblong of 175 mm. (7”) length and 6 mm. (1/4”) thickness.
Heat a non-stick tava (griddle) and cook the pita bread on a medium flame on for 1 minute on each side or till the pita bread puffs up and a cavity is created in the bread.
Cook it on an open flame till it puffs up and brown spots appear on both the sides.
Cut each pita bread into 2 halves and use as required. This is the 4th Breakfast in this series, I will be posting one more breakfast.